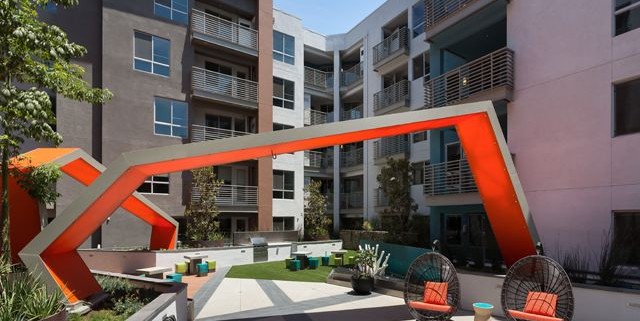 grew up in the 1970s and ’80s. It rarely, however, has much sway with housing developers.

Yet, as unlikely as it sounds, Space Invaders figures into Ava Little Tokyo, the $100 million

streets. Creatures from the video game adorn the carpet in the project’s leasing office.

It’s an unusual approach to design and development, but it’s not the only one in the building.

features such as a bubbling fountain with 10 concrete legs fanning out, with toes pointed upward.

Other aspects of the 280-unit, six-story complex also veer from the status quo.

Consider the balconies: Rather than being traditional white, with maybe a splash of color,

the ones in Ava Little Tokyo are bright assemblages of green, orange and blue glass.

“We tried to create some whimsy,” said Thomas Guiteras, the senior development director

of AvalonBay Communities, during a recent tour of the project. “It’s a different look.”

Designed by TCA Architects, Ava Little Tokyo is a colorful addition to the community that,

apartment complexes such as Hikari and Sakura Crossing, which debuted before the recession.

Ava Little Tokyo is the first Downtown project for the Virginia-based company, though AvalonBay

has other properties in Los Angeles and Orange counties, as well as throughout the state and in

Texas and along the East Coast.

all cultural and economic backgrounds were moving to the Central City. They also noticed the

numerous restaurants and night spots opening in Downtown. It seemed the perfect time to

make a play in the area.

going on for at least five years now,” Guiteras said.

As is the case in many new Downtown buildings, rents are in the neighborhood of $3 a square foot.

The ground floor holds about 19,000 square feet of retail space that Guiteras expects will be filled by a

restaurant and shops, though no leases have yet been signed. The building is close to neighborhood

and is also within walking distance of the Historic Core and the Arts District.

such as maple wood paneling on the walls and cast-iron planters in the gardens. Amenities include

a lounge with a kitchen and game tables. There is also a dog park with a pet washing station and

A rooftop deck offers skyline views along with a barbeque, sink, fireplace and a projection TV.

A fitness center will be available when the second building opens.

per unit (three-bedroom spaces get two spots). Additional spots start at $100 per month.

Ava Little Tokyo also has 79 parking spaces for the public, with a valet option.

Ava is a fit for residents Dawn and Jibril Jackson, who in October moved from Manhattan

with their English Bull Terrier Kimchi into a two-bedroom, two-bathroom apartment.

The couple was used to living in a walkable neighborhood with easy access to public transportation.

They found Little Tokyo to be close to the Metro and the freeways, and are already fans of the fish

counter in the nearby Little Tokyo Marketplace.

“We looked in Silver Lake, Inglewood and Mid-City,” Dawn Jackson, 33, said. “For the amenities

and the quality of the building, it just wasn’t comparable.”

The couple, scheduled to have their first child this month, also have found a welcoming

community in the building. They recently hosted a BBQ and opened it up to fellow residents.

The brightly colored building stands out in the historically tight-knit neighborhood, but Ellen Endo,

president of the Little Tokyo Business Association, said that’s a good thing. She prefers the splash,

she said, to a homogenized community.

“Who wants to see all beige buildings?” she asked.

Before getting to those businesses, however, the inhabitants will have to pass through some of the

other whimsical elements in the complex. AvalonBay hired Degen & Degen Architecture and Interior

Design and gave the firm the directive to create a vibrant aesthetic throughout the property,

complete with artwork on every floor.

silhouettes flanking the phrase “Kiss My Sass.” On the sixth floor is a series of automobile drawings

that wrap around the line, “I’m not weird. I’m limited edition.”